Reactions to the PlayStation Showcase 2021

PlayStation Showcase 2021 was certainly exciting with a lot of exclusive PS5 titles revealed. Crispin reviews and gives his thoughts.

Released on the Ubisoft blog on October 15th, news has spread throughout the gaming community that the expected revolutionary game, Watch Dogs, release date has been delayed until the Spring season of 2014. 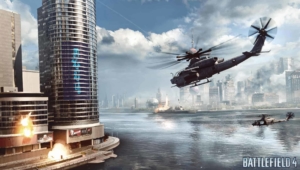 UGP had a play of the eagerly anticipated Battlefield 4 at Eurogamer Expo, and as expected it looks blooming brilliant. Needless to say the queue was monumental, but once we

The hotly anticipated multiplayer reveal for Call Of Duty: Ghosts took place last night, and with it comes a tidal wave of drool from fans of the franchise. The danger was always to over-promise and under-deliver, but when the claims are backed up with hard video evidence, they become indisputable, and pretty bloody exciting. It is hard to know where to begin with so many new features; we’ll start with the some of the new Game Modes. ‘Cranked’ is the game that will get a lot of tongues wagging. Team Deathmatch on steroids would seem an apt description, as you will now play against the clock after recording your first kill. If you dispatch an enemy within the time limit, the clock resets. If not, you go boom! It’s simple, intense and bad news for ‘campers’. We like it! One particularly exciting feature across all game modes is the in game field orders. Players will pick up a briefcase containing field orders, such as ‘kill three enemies whilst prone’. If you die before completing the task, you will drop the briefcase and another player will have the chance to unlock an in game care package by carrying out the order. This will add a whole new tactical dimension within ‘cranked’ and other modes, giving you the choice whether to be tactical in your strategy, or continue racking up kills as normal.

Round of applause for DRM, 4 days before launch and Grand Theft Auto V is readily available to download for free, complete…if you have a modded Xbox or PS3.

Grand Theft Auto 5 is out tomorrow for the Xbox360 and PS3 but alas, PC gamers are left out in the wilderness. Amazon, are advertising that it’ll be released for