Following a lengthy teaser-trailer campaign ratcheting up the anticipation, the free-to-play ACE COMBAT INFINITY will be available to download for PS3 very soon.  Launching on the 4th February the game will be downloadable over the next week for PS3 owner everywhere outside of Japan as a complete beta trial, it features a brand new story campaign with both single player and multiplayer abilities, so start warming up your jet pipes. 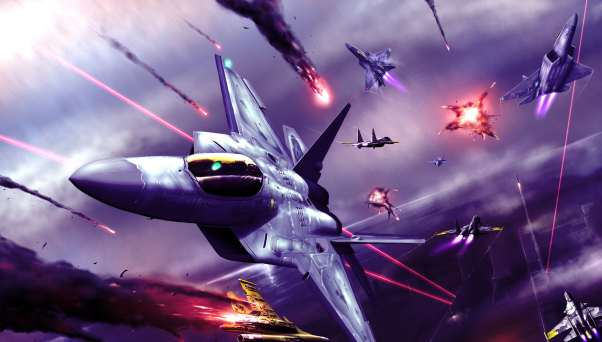 The ACE COMBAT INFINITY taster will have two distinct modes with the possibility of playing either as a lone wolf, or joining up with other players to complete team missions and bring furious anger down on the heads of your enemies en mass.  The game has uprated graphics and smoother controls to make the aerial combat a totally immersive experience and one that is also aimed at novice pilots as well as the fully trained, giving it mass-appeal to all levels of experience.

The full game will involve a story set in 2019 – I.E. five years’ time – featuring the fictional United Nations Forces (UNF) battling a global protagonist in multiple world-wide areas.  Frustrated at the lack of progress, the UNF hire the privateer Bone Arrow Squadron (fnarr fnarr) with the single player campaign giving the player the designation of Bone Arrow 4 with the call-sign “reaper” – it’s all so macho!   The action will take place around Tokyo, a Russian refugee camp and somewhere in Turkey.  Set twenty years from the events of ACE COMBAT 04: SHATTERED SKIES in which a large proportion of the earth was flattened by space debris, the player is pitched against hostile forces at every turn.  Development has focused on creating the hyper-real visuals in an engaging and playable story and it’s those mainstays that has kept the ACE COMBAT franchise going steady for nearly twenty years, and selling close on 10 million units.  With a huge fan base behind it ACE COMBAT INFINITY is likely to be the latest in the long line of success stories, though undeniably a good part of that success is down to the developers listening to the fans and engaging them in the process.  It’s a lesson that many other developers could well learn if they want their brainchild’s to see equal success.

Developed once again by Namco Bandai, those who download and play the simulator – effectively beta-testing the product – will receive a special and unique emblem at the full game launch to flash their dedication to ACE COMBAT.  As give-aways go, I’d sooner have a mark on my virtual fighter than a doe-eyed and dust-encrusted Rambo bobble-head, so it looks like this will be one for my PS3.