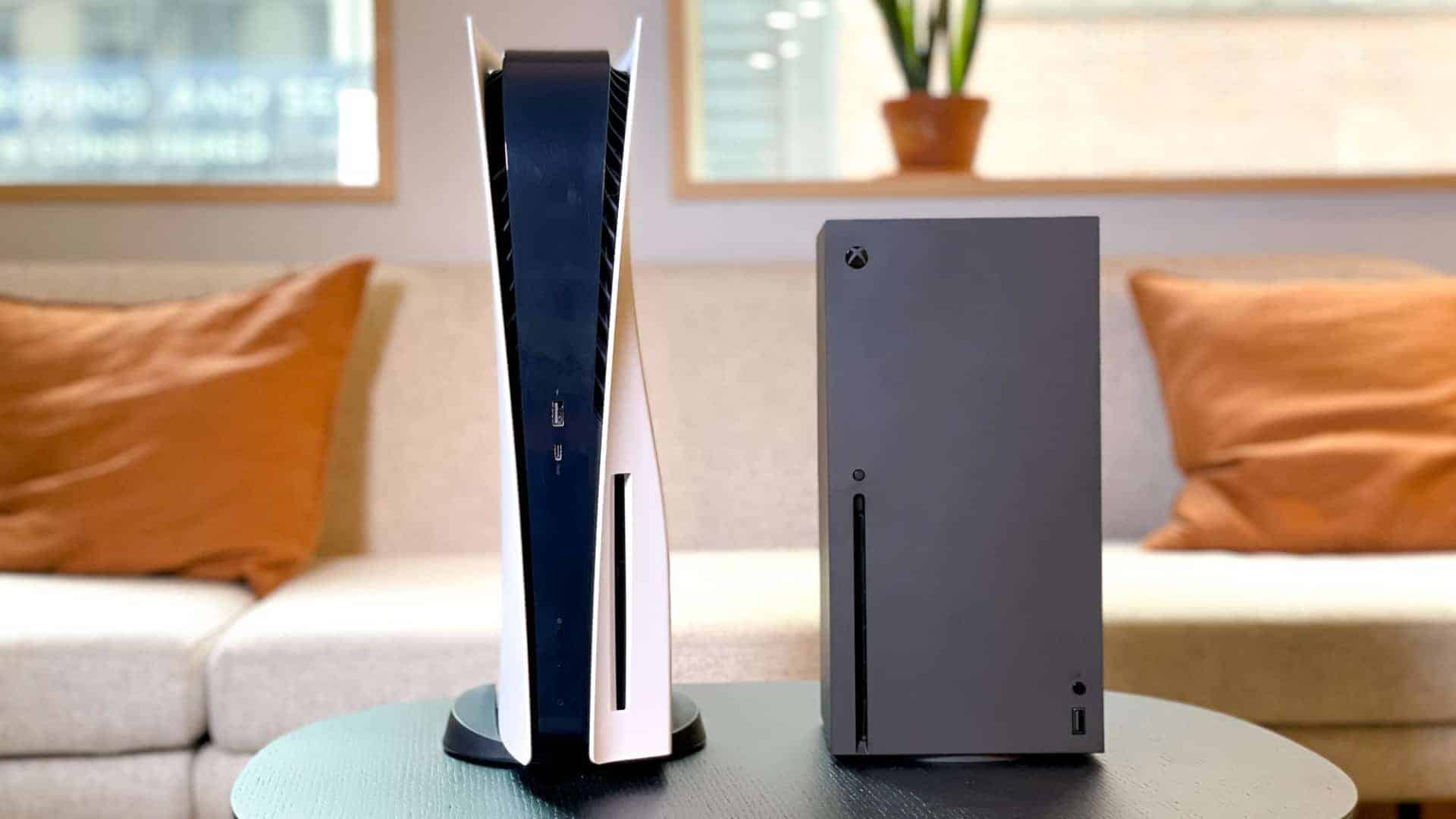 It’s hard to tell whether we’re in a new console generation or not at the time of writing. Technically, both Sony and Microsoft have released their latest consoles (the PS5 and Xbox Series X/S, respectively). However, as all these consoles are pretty much impossible to get for a normal person, Christmas 2020 looks to, still, be heavily based around the now-ageing last series of consoles. Both the Playstation 4 and the Xbox One are starting to show their wrinkles, even if you have the latest upgraded versions of those machines.

So, what’s a game developer to do?

This is not a new problem and doesn’t just occur when looking at a cycle of new hardware. Game developers have always had to deal with the fact that some people have better kit than others. Go back almost forty years, and we see the same problem. Back then, kids argued about the various merits of the ZX Spectrum 48k vs a Commodore 64, and games that were developed to run on one hardly ever looked (or played) the same on the other.

When the Atari ST and Amiga 1000 came out (both in 1985), they redefined the map for every computer gamer out there, more than doubling the previous generation of home computers’ capabilities. Developers scrambled to write games for these superior systems, but there were still a vast majority of players clinging on to their previous hardware. You only have to look at the differences between some of the AAA titles in the late 80s to see just how stark the contrast was. Far greater than the shift between Xbox One and Series X, the jump from a Speccy to an Amiga 500 was insane!

What did the good game publishers do? They wrote multiple copies of the game, with separate teams familiar with the hardware’s architecture doing their best to match the overall design. It’s still pretty much the same system today. Sometimes they succeeded, and sometimes they failed.

More often than not, it came out badly for those still using the previous generation of hardware.

We live in a world of temporary technology. In fairness, consoles do better than a host of other devices. The Xbox One was first released in November 2013 – that’s seven years ago, and if you are still using one of those as your main console today, you’re not doing too badly at all. Compare that to mobile phones – in November 2013, your top of the range iPhone was a 5S, running iOS 7, on a four-inch screen. It’s the phone that introduced fingerprint recognition to the Apple range, with Touch ID. By comparison, today’s iPhone 12 Pro is a monster and is, importantly, seven generations of the phone later. Seven. You unlock it just by looking at it.

Software developers can’t be expected to hold back, ignoring the progression being made to the hardware, in order to keep supporting the current systems as they get older. Instead, they are always one step ahead, developing for platforms that just on the horizon. But they still have to provide a game experience for the existing market – to do otherwise would mean shipping their game only to those few early adopters and losing out on many millions of potential sales.

It’s a balancing act that’s so easy to get wrong.

Exclusivity – one way to get it right

Touting a product as an ‘exclusive’ is one way to get it right. An exclusive title can be developed for a single platform with no care to what’s going on around it. Sure, it’s going to sell a lot less (comparatively). Still, with the right execution and marketing, an exclusive can do double duty – not only making money for itself but also giving the new hardware a must-have game that provides extra incentive to make a move.

Microsoft did this with expertise in 2001 with Halo (technically Halo: Combat Evolved). Halo was a game that was being developed by Bungie for MacOS (yup, back then, Bungie was a Mac-friendly game company at a time when everyone else ignored the platform) and Windows. It looked great, and Microsoft needed something to really promote their new console system. A deal was struck.

As an exclusive, Halo brought droves of people to consider an Xbox as their new console of choice. It was marketed beautifully, presented as the game hardcore-gamers simply had to have, and comfortably put Xbox on the map.

Of course, they weren’t the first to master such a plan. Ever heard of Mario?

Nintendo’s success can be linked to several factors, but their game exclusivity has to be one of them. Super Mario, Mario Kart and Zelda are three vast intellectual properties (IPs) that keep the Nintendo dream alive. With each console upgrade, there’s always at least two of those three series ready to go with a launch title, bringing a legion of fans willing to shell out for the newest technology. What they lose out in sales on other platforms is doubtless irrelevant in what they gain in terms of Nintendo brand loyalty, and it’s been a strategy that has worked for them for four decades.

Exclusive titles still exist and are part of the drive for the new Sony and Microsoft consoles, but they don’t seem to have the same impact of some of those older promotions. Spider-Man: Miles Morales leads the pack on PS5, but while it’s a Sony exclusive, it’s not a next-generation exclusive, as you can opt for a PS4 version; and on the other side of the war, Halo Infinite is pulling the same duty as its first incarnation predecessor, but again is a Microsoft exclusive, not a Series X exclusive.

In fact, both Sony and Microsoft are looking to another model altogether – working on backwards compatibility and, perhaps, a slower uptake to the new consoles than a direct “all aboard” jump.

Pushing too hard – how to get it wrong

Here we have a game developed to push the hardware to the limit but became a casualty of older hardware and consumers desperate to play it without upgrading their tech. To all reports, the outgoing generation of consoles simply cannot handle the demands of Cyberpunk 2077, a new-generation game that’s, essentially, not suited to support any sort of cross-gen support – despite it being developed and promoted as such.

CD Projekt Red should have just accepted that their new flagship game was next-gen only and avoided a whole load of problems. In this case, the loss of sales that would have happened would surely have been preferable to the huge uproar and demand for refunds that have taken their place.

Would a delay of six months, until everyone who wants one has managed to get their hands on a PS5 or Xbox Series X, actually have been worse than a rushed release and all the associated negative press?

Getting it wrong has to happen because the alternative is that no one has any mistakes to learn from, but when it does, it can feel so painful – especially when it’s with a game so strongly anticipated.

The problem with successfully cross-platforming your game is simply that no-one notices. Take the Assassin’s Creed series, now thirteen years in. For the most part, you’d be hard pushed to find a gamer who’d played it on their platform of choice, who had too much of a different experience from another player on a different console. It just works, and it doesn’t care if you have built a £4,000 gaming rig from the very latest hardware, or if you are using whatever console you have to hand. One might provide better graphics or a slightly improved framerate, but the experience is ultimately equitable.

Ubisoft had another clever trick, too, which was to stretch the IP, and not simply try to replicate what worked on one machine on another. There was no way the PS Vita could handle the full Assassin’s Creed III game, built for home consoles at the time. So, they developed a sub-title Assassin’s Creed III: Liberation to provide a handheld experience in the same universe without breaking anything. This idea then poured out across a multitude of platforms, meaning there are linked Assassin’s Creed titles on pretty much everything, even if some of them only pay the vaguest type of lip-service to the original. Assassin’s Creed Memories on iOS/Android is as far from a third-person stealth game as can be imagined, really. Still, it keeps the franchise alive and importantly, doesn’t leave anyone feeling that they are playing an inferior version of the game they so desperately wanted.

But for true success, that crosses generations, platforms and even eras of gaming, look to Minecraft. There are differences between versions, but they never detract from the core game. Play Minecraft on your phone, and then jump to your Playstation 4, and you’re playing the same game. What extras the PS4 (or Xbox One) version brings you feel like bonuses, not like the developers have taken something away to cut it down.

Minecraft is a perfect example of cross-gen done right, and its success and longevity prove it. It’s almost a decade old, and thanks to its willingness to perform on anything and everything, I can’t see it dying for many years to come.

Are there any answers to the cross-gen problem?

If there was a definitive answer, you can bet that things like Cyberpunk 2077 would never happen, but the truth is, there isn’t. Developers have to keep pushing, console companies have to keep improving, and some things will just get left in the dust as the trample of evolution stomps over the top of them.

From a consumer point of view, the answer is to always have the latest technology, make the leap from current-gen to next-gen as soon as you can, and never look back.

From a developer point of view, it would probably be lovely to assume all your customers will jump out and get the next stage of hardware. Still, they have to be realistic and do what they can to keep supporting old systems for a while – at least until ‘old’ becomes ‘obsolete’.

Why not just release games and then make them backwards compatible?

Money is always the driving factor (and probably always will be). While there is a massive user base still using six-year-old technology, developers and publishers will have to keep them happy. Thus, games need releasing across generations at the same time—all sharing the same release date. As time passes, the new-gen takes over from the old, so a title released 6 months after launch on the new-gen hardware … it’s just not going to work!

Personally, I think it’s the mistakes that are needed. To pick on Cyberpunk 2077 for one last time (I promise I will stop), it has done something significant and shown that old kit up for what it is – out of date, groaning at the seams, and destined for the scrap pile. For every person wanting to play the beautiful open-world adventure, which takes this as a sign that an upgrade is necessary, Cyberpunk 2077 has done a service to the game development industry and laid the groundwork to make it easier on everyone else.

Of course, this would all be made a lot easier if there were enough consoles to go around in time for Christmas, but then that’s a whole other story.