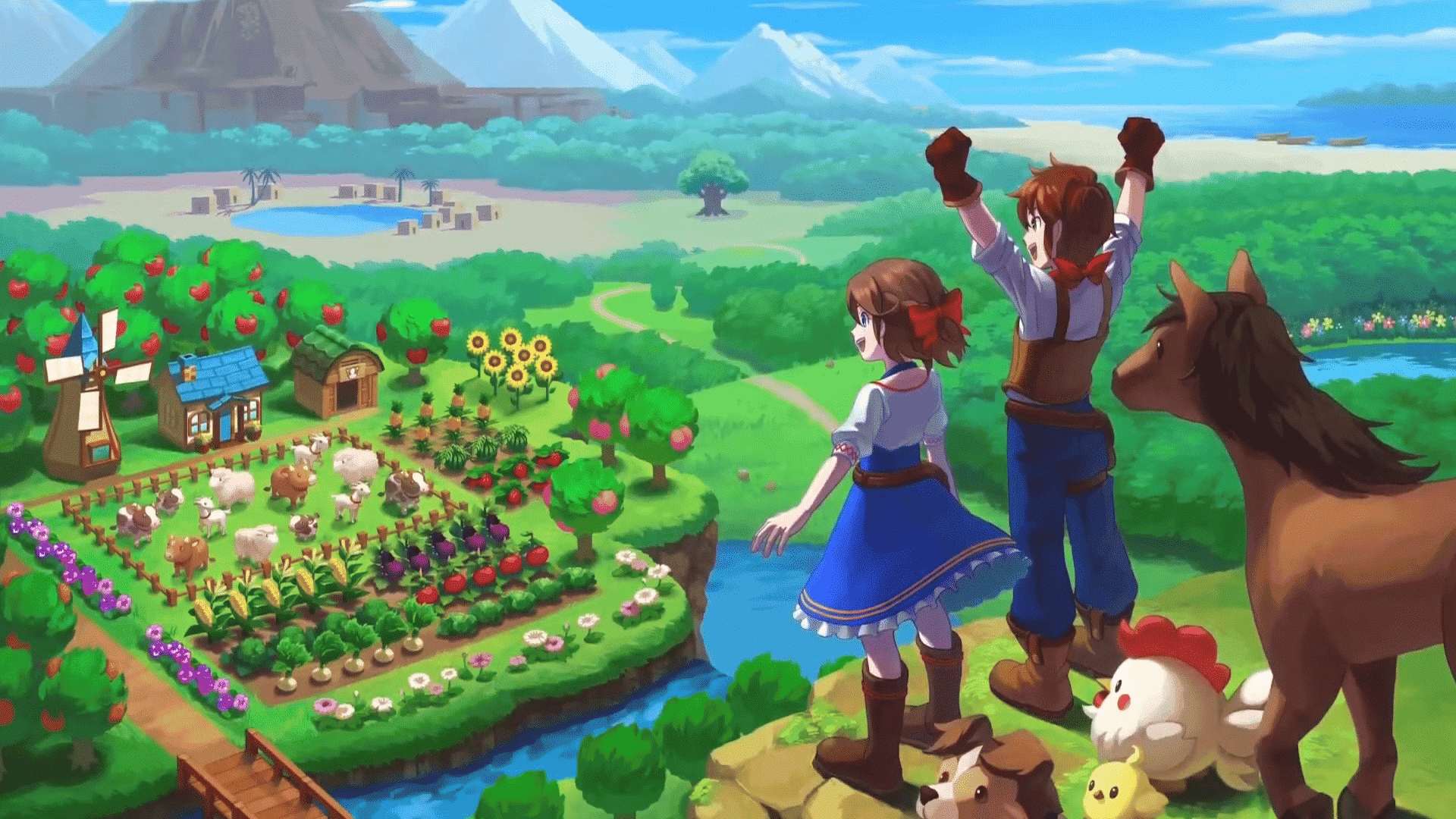 It is immediately obvious that Harvest Moon: One World is a game with a little bit of an identity issue. Due to various confusing things to do with publishers, today’s Harvest Moon series isn’t quite the same Harvest Moon series that began over two decades ago. It’s a branch that took the Harvest Moon name for itself, while the original became Story of Seasons. That should mean nothing to gamers just looking to pick up this latest game and have fun, but it does affect you because instead of simply holding to being a farming simulator, Harvest Moon: One World has sort of decided it’s a role-playing game. Only it isn’t obvious—or done very well.

Final Harvest Moon: One World Dragon Quest of the Wild

Confusing heading? That’s because this game kicks off not knowing what it wants to be. The immediate feeling is that we’re back in the 1990s, playing one of the early series JRPG games of that era. You wake up in bed in your tiny hut-like house with your mother off cooking breakfast (or something) and venture outside with a sense of ‘eh, what am I meant to do? I thought this was a farming game’. It’s so reminiscent of the era that I found myself wanting to click on things that looked like chests to see if there was a sword and a healing potion inside.

The dialogue is awful, reminiscent of the very worst of those poor 90s cheesy translations, and there’s absolutely no depth whatsoever.

The beginning of the game seems centred around the fact that there are no types of vegetables in the world except potatoes, and you’ve been eating these for (presumably) sixteen years or so. It’s astounding that you haven’t died of malnutrition, but both you and your mother look hale and hearty, so that’s good.

You have a book that you’ve been reading that tells mythical tales of such wonders as ‘turnip’ and ‘carrot’, but they are unknown in the world today.

It’s so ridiculous that it’s actually fairly hard to follow. You then meet a fairy sprite thing that gives you a magical turnip seed, and you’re taught to plant it. Hooray, maybe you can save your planet from the post-vegetable-apocalypse and bring life back to the world.

The thing is, this ‘plot’ is scuppered ten minutes later when you venture out. A few steps along (perhaps 30 mins of in-game time) is a village where they have animals, more vegetables, and a spread of things, including a shop that sells seeds.

Have you, your mother, and your strange inventor-stereotype next-door neighbour been living off potatoes for the best part of a decade while half an hour away, they dine like normal people?

As role-playing game plots go, this one is mind-blowing!

Thankfully, at some point, we are reminded that this isn’t the world’s worst role playing game—it’s a farming simulation; a time and resources management game. Well, thank the stars for that!

Slog your way through the first hour of nonsensical rubbish, and you finally get to plant a plant, properly.

Put aside the mechanic of the travelling farm that fits into an otherwise irrelevant robot if you feed it potatoes (or mushrooms, whatever, really) for a moment. Let’s look at the game for what it actually is. Now, we might have some fun.

Did I mention, by the way, that the graphic of you eating only potatoes with your mother in this vegetable-deprived land is of a bowl of green leaves and vegetables with the potatoes on top? That’s strange, right?

No! Mustn’t get sidetracked thinking about the ‘plot’. Stick to farming!

So yes, you grow a turnip, and it isn’t long before you are also growing bell peppers, little flowers (worth selling), and corn. There’s a mission to grow some grass to help the sick cows, and suddenly everything opens up. Lots to grow, lots of people wanting things from you (including potatoes), and the need to sell goods for money.

Push the role-playing aspirations firmly to one side. There’s a clock ticking and we have work to do.

The basic structure of the game is set in days. The clock ticks down in real-time, from 6 am when you wake until 6 pm when everyone else goes to sleep (and often, so do you). In the beginning, there’s a lot of this time spare, and you can sit around organising your bag and fridge to look neat. It’s not long, however, before you are rushing about, wondering how you can accomplish what you need before the world around you takes to dinner and TV, turning off quests and plunging you into darkness.

Soon, the game has you running quite the distance to get the resources you want, and when it takes an hour to get somewhere and an hour to get back (in-game, not real-time, thankfully), those chunks of the day get eaten with haste. Looking after your crops in the morning can take a couple of hours, checking on your animals another hour or two, and before you know it, it’s lunchtime, and you still need to get to the mine to put in some hard labour before dark.

At its heart, this is what makes a simulation like this fun. You do have to make decisions from a relatively early point in the game, about whether you are going to ignore the odd crop, or not clean up the manure in the shed, in order to get somewhere else in time instead. You scramble and juggle and wince as the choices you make press you to become more and more skilled, and more decisive. Sometimes you have to sacrifice one ideal for another, and it’s not simply a game of ‘oh, I can just do everything’.

Well, at least, not in one day.

So much to collect, gather, and do

One of the joys of a game like Harvest Moon: One World is that feeling of collecting everything. Sure, you might not particularly care about white celery, but it’s great that you’ve got it in your little book, turning a ? into a nice icon. There are pages of things to collect, from the basic vegetables that are your early focus to recipes, mutations, other farming materials, animals and more.

It’s a time suck, for sure, but it’s a fun time suck. Everything you add brings a smile to your face.

The longevity of resource-based games is all based on the depth of its resources, and it’s pleasing to feel that Harvest Moon: One World has that depth set to a good level. Not too little to mean it’s easily completed, but not so much that it seems unobtainable.

No doubt, some of the rarer items and mutations will need some serious investment to discover, but if you are a completionist, you’re probably already used to that sort of treatment.

There is a touch more depth when you learn that different plants are affected by season and location; true in real life and now part of the farming sim. Getting it ‘wrong’ can mean crops don’t grow, take longer to grow, or mutate into other things. It’s a satisfying addition, though, and while it may take some time to understand fully, it adds another nice layer of thought to the whole process.

Because Harvest Moon: One World thinks it is an RPG (it’s not, remember, it’s not), it has a bunch of quests and a lot of exploring to do to progress. These are all a little random and can be very time-consuming. If you are looking to plough through (pun intended), you might find your patience put to the test.

Often, the item an NPC is after requires you to spend days, if not weeks, of in-game farming time to grow the right plant. Then you have to get to them when they are about (remember, everyone is off to bed at 6 pm) and hope they haven’t moved. Chances are you didn’t know where they were anyway.

It’s a shame, and isn’t worthy of a game in this era, which leads onto the biggest point…

What year is this anyway?

Other than the fact Harvest Moon: One World is running on a Nintendo Switch, there’s nothing that makes me feel it’s a modern game. The staggeringly-incompetent script is straight out of the late 1980s/early 1990s; the RPG elements are also reminiscent of that era. None of the aspects of a modern RPG is here anywhere, and even the farming elements central to the game feel like something I might have played two decades ago.

Even the scenery, a bland, continuous stream of nothing in particular, feels more like a remastered version of something off the SNES than a brand new modern game. Sure, the graphics let you know it’s not a SNES original, but the actual terrain..?

Almost everything about Harvest Moon: One World screams nostalgia rather than cutting-edge gaming for 2021. It’s effortless to slip into it and have fun in the way that you did twenty or thirty years ago, but it’s not really bringing anything new to the table.

Except the baby cow graphics. Those are super cute, especially when you clean the dust off it. Awww, baby cow.

Are we having fun yet?

My biggest problem with Harvest Moon: One World is that I really enjoyed it. As I tucked my little character into bed at the end of each day, I was eager to start the next. Hours passed as I plugged away, incrementally increasing my farm, my knowledge of the area, and my completed quest log. I didn’t want to put it down. It was both relaxing and occasionally-stressful in all the right ways, and with each little improvement in my situation, I felt a sense of pride.

In short, it was a lot of fun!

But I didn’t think it should be. I wanted to get more out of it, to feel that the developers had made a ground-breaking game for the masses. They haven’t, not at all. There are literally hundreds of technically better games than this, and probably tens of games in the farming-sim genre that are among them, yet there is something here, something addictive and enjoyable.

When playing a game, it’s a personal experience. Often you have to take what others say and ignore it and ask yourself, ‘yes, but am I enjoying it? After all, it is my game’. With Harvest Moon: One World, I found myself saying yes to that question. Games are meant to be fun, and this is fun.

For now, at least.

And when that’s no longer the case, I’ll probably put it away and never think of it again. Some games are just like that.

One bonus final stab at the scriptwriters

It’s not often a game makes you cringe before it’s started.

I watched the intro sequence to Harvest Moon: One World. Words twinned with a fade-in-fade-out picture like reading a child’s storybook. It starts with a pretty green landscape, resplendent with bright colours, and then fades to a very brown picture of a horse and some sad looking cows with the words:

“Creatures great and small thrived across its verdant landscape…”

Verdant landscape..? Verdant literally means ‘green with grass or rich vegetation’. And they chose to place it over the dullest, least green picture in the sequence.

Just wow. Sort of sums it up, really.