Monster Hunter Stories 2: Wings of Ruin is landing on the Nintendo Switch on July 9 2021, and we’re excited for more monsters, bigger battles, and the gear of any monster hunter’s wildest dreams. Players of the Monster Hunter series have a lot to look forward to, with big changes coming JRPG mechanics.

Whether you’re a lifelong Monster Hunter or thinking of jumping in with Monster Hunter Stories 2: Wings of Ruin, you need to know a few things before you buy.

The Monster Hunter franchise is based around the idea of collecting monsties through battle, gaining items and experience, and exploring the world of the Monster Hunter. We’ve put together the basics about this game and what you’ll need to know going into Monster Hunter Stories 2: Wings of Ruin to get the most from your monstie experience.

Is There a Story?

The Rathalos are missing! Along with your companions, Wyverian Ena and feline hero Navirou, you set out to solve the mystery.

You are the grandchild of Red, whose Monstie was Guardian Ratha—revered protector of Hakolo Island. As you set out as a young Rider keen to learn all you can, you encounter Ena, a Wyverian girl who once knew Red. In Ena’s possession is an egg that Guardian Ratha has entrusted her with.

But, all around you things aren’t quite as they seem. As you try to figure out the cause of these unusual environmental occurrences, the egg finally hatches. A flightless Rathalos with small wings bursts from the egg. The story will take you across the map, through towns and on to the bigger destinations of the Monster Hunter Stories 2 world. To complete the story, simply follow the main quest markers to fulfil them as you go.

If you’re interested in spicing up your journey you can accept various subquests through the Mission Board in the main town. NPCs will often offer you subquests too, and these side missions often involve hunting monsters (surprise surprise) or finding items.

The Monster Hunter map includes a host of towns, locales and areas for exploration along with your friend, Navirou, or your current monstie companion. Most areas allow players to mine, fish, forage, and collect items that may all contribute to crafting weapons and armour. Beware, though, monsties are everywhere. You’ll need to focus on improving your gear and experience to defeat the higher-level ones. You’ll come across Monster Dens where you can find Egg Nests. You can hatch these collected eggs to gain your own monstie companion.

You will find though, that some areas are inaccessible until you have the correct monstie companion and skills. The map includes Catavan hailing points that act as fast travel points for speedier travel to destinations you’ve already been to.

Finally, is the ability to unlock the ability to partake in Local or Online Battles against other players using your monstie allies, adding another layer to your Monster Hunter experience. 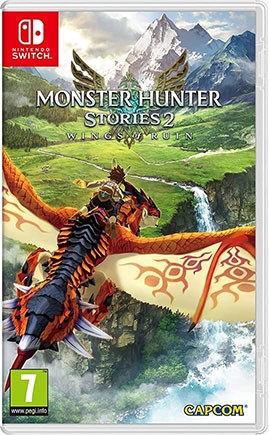 The combat in Monster Hunter Stories 2 is a turn-based battle within a JRPG mechanic–and we think it works perfectly to build the atmosphere and keep players improving their skill and gear.

To start a combat scene, simply approach a monster–preferably from behind to get in an ambush hit. Be careful, though, this move can go both ways so protect your rear from enemy ambush hits too.

You’ll travel and fight with your party, which usually consists of your character and your chosen monstie of the moment. Taking advantage of each monstie’s attack types is essential. You’re able to switch between monsties without penalty to use their type to your advantage. This is where it comes in handy to know the various monsties’ attack traits.

Each type of attack has distinct advantages and disadvantages. Learning each attack’s strengths and weaknesses is a must as you move up the experience levels. The quick version goes something like: Speed beats Power, Power beats Technical and Technical beats Speed. Remember this and you’ll be able to combine the best monsties for each scenario you may face.

Often within combat scenes, you’ll be prompted to input a quick-time-event action. Follow the directions that come on screen to press the corresponding controller button within the time to complete a move successfully. These quick-time events come in three formats. Power Clash is the first and requires tapping the A button repeatedly. Air Showdown requires alternate tapping of L and R buttons. Breath Blast requires quickly rotating the Joy-Con. Completing any of these actions allows you to deal bonus damage and increase your Kinship meter level.

There are four key weapon attack combinations to bear in mind when it comes to monster combat and boss battles. Every weapon has a unique combo trigger. They require performing a specific attack sequence over consecutive turns. Here are the combos for each weapon:

During battle in Monster Hunter Stories 2 , you’ll notice your Kinship Gauge level increasing. Think of this as your buddy-o-metre between your character and your current monstie. When you see the gauge reach its highest level you’ll be able to mount your monstie and take to the sky. Some moves and skills are restricted during flight, but attack and defence stats are increased. If you keep fighting while mounted then your Kinship gauge will continue to go up, at this point you’ll unlock special attacks. Be aware that when you use this special attack the flight will end and you and your monstie will be separated once again. A neat function of monstie riding is that if your life bar is depleted during flight you’ll be separated, but your life bar will then return to the level it was at before mounting up.

Sometimes, though infrequently, monsters will retreat during your attack. Their den will pop up close by and you’ll be able to raid their egg nest.

A Battle Pouch is fairly self-explanatory. It’s where players store items for use in battles like potions, bombs, and herbs. Be sure to put your required items in your Battle Pouch before hunting, as items in your inventory won’t be available during combat sequences.

Using skills will inevitably drain your Kinship gauge. To counteract this simply match your gear to your monstie to utilise the synergy effect. This reduces the overall Kinship gauge cost of monstie skill usage.

Weapons and gear are found at the Smithy. You can purchase gear, but you can also upgrade your gear. Upgrading will require materials and items with each upgrade tier requiring rarer and rarer materials.

Subquests can help you here. Often you will receive material rewards on successful completion. In the Hunter city of Gildegaran you can complete Forge Quests to make new weapons and armour sets using the mats you get. These include full sets of weapons and armour that will improve your synergy when fighting with the monstie that matches the gear (e.g. using Zamtrios gear while fighting alongside a Zamtrios).

To obtain certain monstie types, you will need to find their eggs and hatch them. With 11 types of egg in Monster Hunter Stories 2, this process involves a lot of memorising and careful scouring of monster-inhabited areas. Types of egg include Herbivore, Fanged Beast, Bird Wyvern and Neotperon Eggs. For each type of egg, there is a specific pattern variant to look out for. For example, all Bird Wyvern eggs have the same speckled shells, while all Herbivore eggs have a long stripe.

Finding monstie eggs isn’t always as easy as it sounds. You can only find monstie eggs within egg nests, and these are located inside Monster Dens. These dens will pop up randomly in the field, and you’ll often have to fight for the right to nab your next egg.

Identifying eggs is simple once you know what to look for. Pay attention to what your companion Navirou says about the smell and weight of certain eggs. The heavier and better-smelling eggs will have better genes and more bingo slots. But don’t worry, you’re able to swap the egg a few times in case you didn’t pick up the pattern, smell or weight you were looking for.

On occasion, players will come across rare monster dens that have a distinguishing golden cave entrance. The eggs in these dens–as you might have guessed–contain rarer monstie varieties.

If you can’t wait for Monster Hunter Stories 2: Wings of Ruin then check out Monster Hunter Rise and join the hunt with a collectors edition of the Nintendo Switch game.

Rise to the challenge and join the hunt! Monster Hunter Rise, the newest entry in the critically acclaimed action-RPG series, is coming to the Nintendo Switch.

Growing Up on RPGs – Part 3

Story of a Game: Guitar Hero

The History of the Game Engine: Part 7 – Traversing the World

History of the Game Engine: Part 3 – The Rise of 3D Graphics

History of the Game Engine: Part 1

The History of the Game Engine: Part 6 – From Pawn to Cho Ku Nu