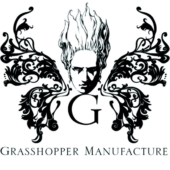 Grasshopper Manufacture Inc. is an interactive entertainment software company established in 1998. To date, the company has developed over 25 titles for home consoles, many of which were written and directed by CEO/Game Designer Goichi Suda. His unique and innovative style has become renowned among a wide cross-section of game enthusiasts, and has garnered a great deal of attention from all around the world.

The studio is well-known for its surreal adventure and action games that focus on stories with a bizarre execution of its ideas. Although a few of their smaller games had received obscure overseas releases, it was with killer7 in 2005 that Grasshopper and Suda achieved worldwide recognition for making games unlike anyone else in the industry. Though their games are of various styles, from Suda's own noir-thriller adventure games, to over-the-top action-comedies, to postmodern RPGs, almost all of them are very distinctive.