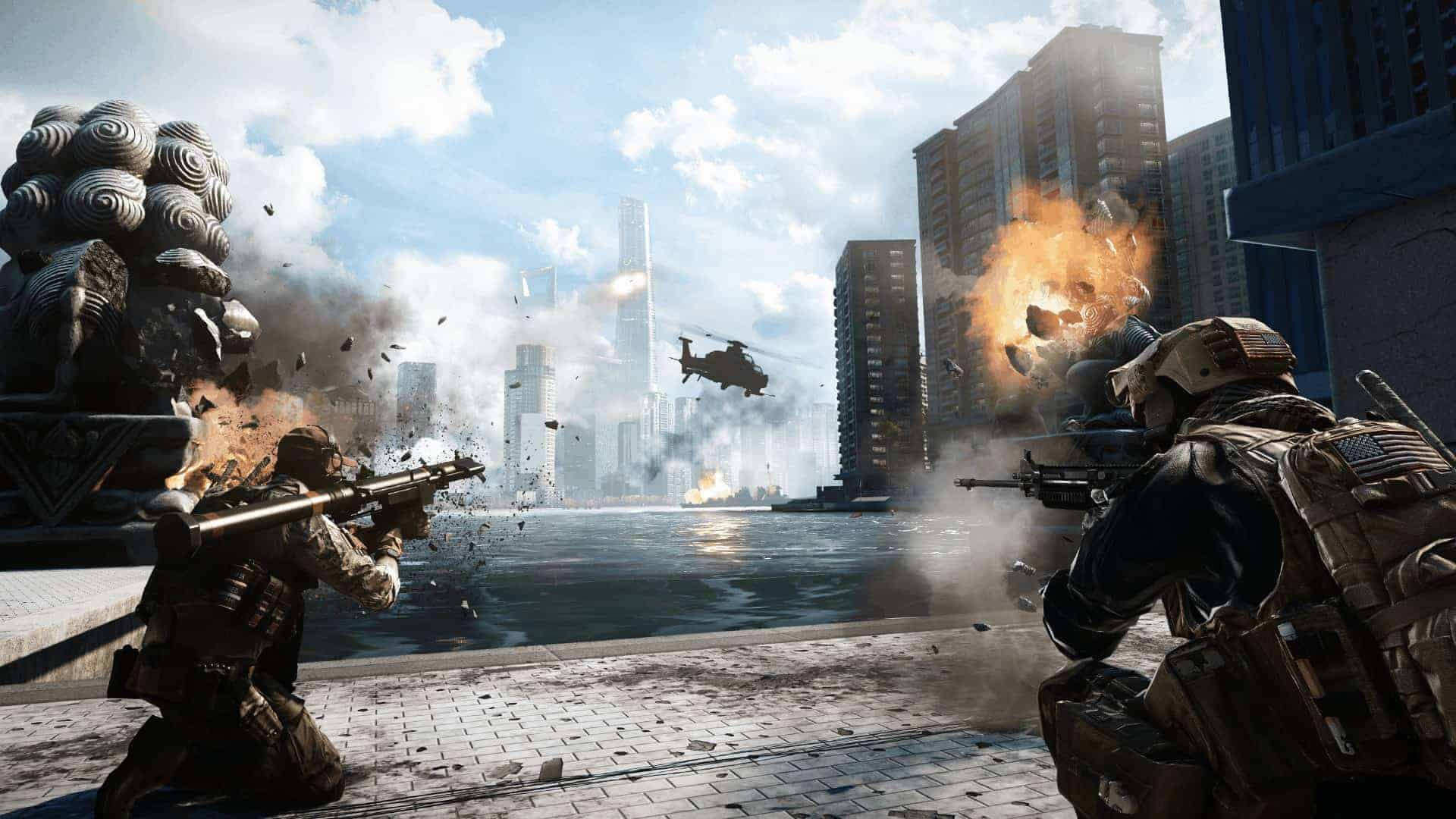 Battlefield 4 comes screaming at you; weapon raised with bits of metal and concrete tumbling to the ground in slow motion while a helicopter goes head-to-head with a tank in the background. That is what I imagined as I joined my very first multiplayer game of DICE’s brand new shooter. And how surprisingly accurate I was. Battlefield 4 is just as grand and chaotic as its predecessor with shrapnel, vehicles and players flying all over the place in impressive new maps, all waiting to be explored. While many people will argue that this is merely Battlefield 3.5, all I can say is: Nuts! Ok so not my actual answer. Battlefield 4 has enough changes and differences to warrant the ‘4’ at the end of the name. The current iteration in the Battlefield series has done a fine job of both impressing and frustrating me. The game is still in its early stages and with that comes the torrential downpour of crashes, glitches and server meltdowns that has many people seething with annoyance – but not me.

I am tolerant of all these problems because I know they will be fixed in good time and when the game does work it is furious fun. Now with the new Frostbite 3 engine, maps look more aesthetically pleasing and can be de-constructed quickly with well placed tank shells, grenades and bullets. Just watching a tank round hitting a wall and that wall falling apart seems too life like to contemplate. Moving away from walls, the ability to manipulate the maps comes in two different forms. The first is the rather overly macho sounding ‘Levolution’ which, despite the name is an amazing addition to Battlefield. In each map a large destructive event can be triggered which alters the gameplay. If you played the beta or saw the gameplay trailer of the Siege of Shanghai map then you know what I’m talking about. Trust me: these things are hard to miss. Even if the name sounds naff, it is difficult to deny that ‘Levolution’ is a fantastic addition to the series which opens different corridors or ambush points for players to use. This sudden change in layout can potentially mean a turning point in the battle. Take the map 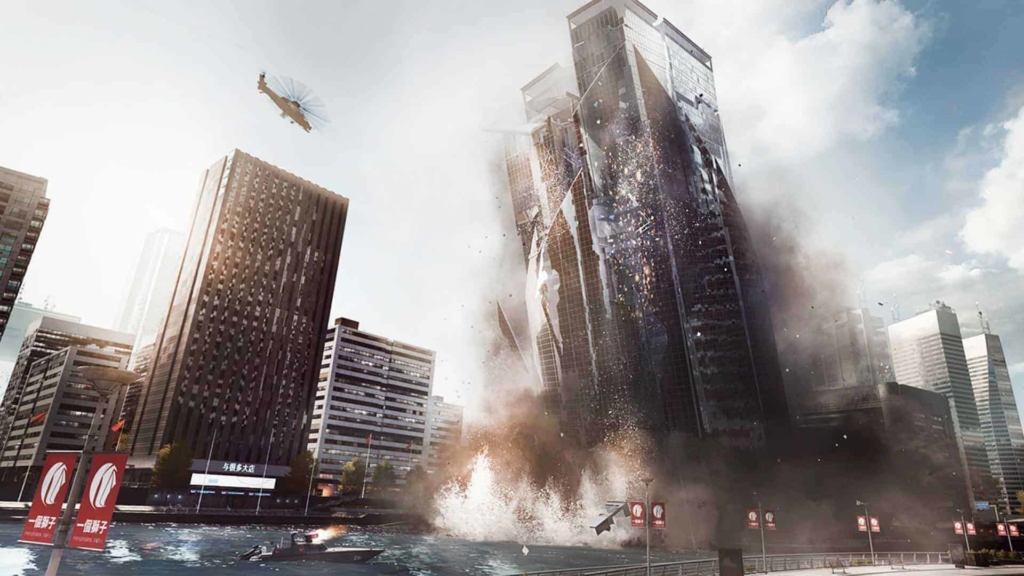 Paracel Storm for example, that has a ship pinned to a giant wind turbine. The wind turbine was hit one too many times and the ship broke away and crashed into the island, wiping out the defending team. Suddenly, the enemy team were on the back foot; something that they never recovered from. Drastic changes like this can swing the game in an instant, creating desperate and ferocious flashpoints by soldiers staggering from the wrecks of buildings or vehicles.

While these big Hollywood style set pieces can change games entirely, there are far more subtle changes that can be made to affect individual skirmishes, helping or hindering individual squads rather than all players. I recall during the beta play, I found myself sneaking around an underground mall trying to capture a point. I ran to a corner and noticed a button I could interact with. The history of me and mysterious buttons is well documented and turned out like it always does. Pushing the button closed the shutters to this shop meaning that in my little corner I only had to deal with one entrance, a narrow doorway, rather than two. I held out long enough to kill a squad of three players attempting to come through the doorway before a well placed grenade exploded in my face. Little touches like this add new challenges and opportunities for players and encourage careful exploration of maps to discover new ways of defeating enemies – or being defeated.

The ranking and progression system has had a serious tarting up session since the last game which now, means some upgrades and camouflage for weapons and vehicles plus XP boosts can be randomly unlocked via bronze, silver and gold battlepacks; a kind of ‘trick or treat’ system. Don’t despair since the majority of upgrades are still unlocked through weapon use and are unlocked in a less randomized way, meaning you don’t unlock a scope with 12x zoom before a 4x ACOG scope for example. Along with this reshuffle, weapons and equipment have been changed around to balance the gameplay. Other than this, the soldier classes have changed very little. It is this point more than most that makes me understand why people consider Battlefield 4 a mere expansion of Battlefield 3. Overall, the ranking system feels much more consolidated and less chaotic than the previous Battlefield title which should help new players get comfortable, who may have found themselves on the receiving end of a 900 metre headshot.

Grudgingly, I should also mention the Campaign which took almost no time at all and felt like I had swallowed a box of sleeping tablets.  Try as they might, DICE has delivered a weak, nonsensical plot with cardboard characters. You are ‘Recker’, part of a hardcore and badass squad called ‘Tombstone’. Just as in the previous title, the characters of ‘Tombstone’ are the usual cliché cardboard cutouts. You have the naive, fresh faced soldier, the suspicious and foul mouthed black guy and you – who doesn’t talk and is only really useful for opening doors. While I don’t really mind playing a silent character, certain sequences in the game really emphasise how detached you apparently are from all decision making and discussion. It may seem insignificant but as the supposed leader of ‘Tombstone’ you would think that ‘Recker’ wouldn’t have to bunny hop around his squad mates or commanders or stand on a table in the corner just to try and look at a map. Even Casper the Friendly Ghost would feel more involved!

The plot of the campaign does nothing to encourage this notion of detachment as each mission awkwardly tries to bind together a barely interesting story about an aggressive Chinese admiral who has staged a military coup and is threatening the world. At least that is my educated guess as it is not made clear what the admiral is threatening to do. Along the way, you recruit a Chinese agent (I’ve forgotten her name already) but naturally the foul mouthed black guy doesn’t trust her and their storyline is supposed to flesh out the characters.

All it does is make you sit awkwardly in the background while they bond over what drives them to fight and other recycled garbage from every military film and game ever made. It is the only attempt to flesh out the two dimensional characters but with only seven missions to do it in, the bonding is quickly pushed aside and replaced with in your face combat.

The combat itself is a slightly more positive aspect. But only just. The setpieces are, of course, stunning and a great way to show off the new Frostbite 3 engine but that is all the campaign feels like; a set piece to show off the new  Frostbite 3 engine. Yet the impressive explosions don’t hide the slightly buggy campaign and the puny enemy AI. At one point you are tasked with rescuing a VIP from a high rise and, after some sneaking around you get 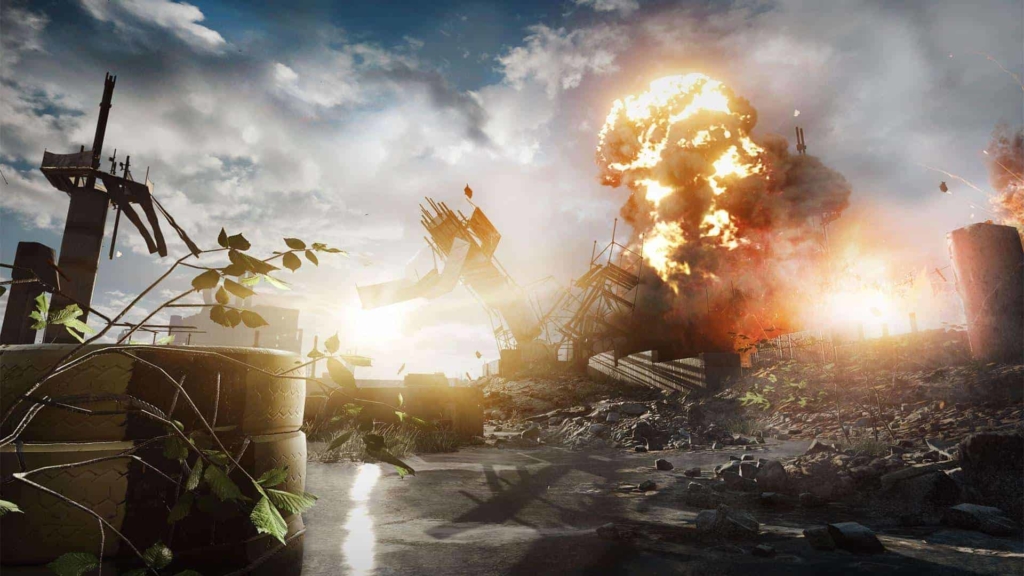 to a building overlooking the main plaza of the high rise. So I spot a ladder and try and climb down it. Lo and behold I fall to my death but instead of spawning back at the overwatch, I spawned outside the main doors of the building I’m supposed to sneaking into. I then spent 10 minutes trying to get back to the overwatch only to realise the AI can’t detect me and completely ignores my mad dash across the plaza.

In the end, Battlefield 4 has delivered another impressive batch of bullshit with the campaign with little thought given to the plot or the characters. While some of the driving sections are fun and the set pieces are impressive, it is still an average, on the rails shooter which gives you little freedom to make decisions or play the game any other way than direct aggression (don’t even bother trying to use stealth). The heart and soul of the game is in the beautiful and varied multiplayer game types which have equally varied maps on which to blast through walls, building and enemies. The multiplayer doesn’t quite hit the mark at the moment with the amount of bugs and server crashes but when it does work you will have the most memorable of memorable moments in the history of memorable moments!