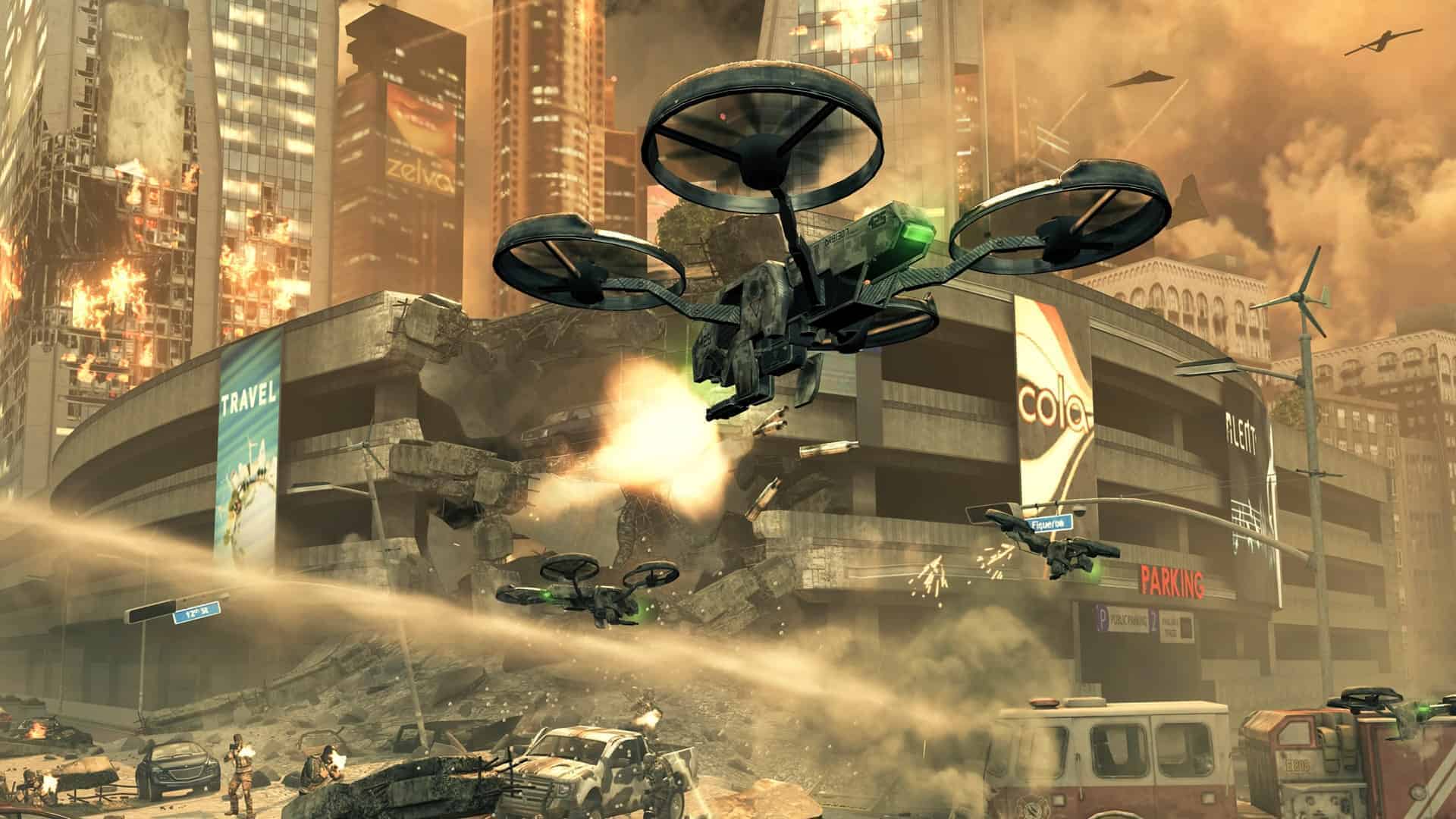 Treyarch have done it again! The 9th Call of Duty has finally been released and I for one practically wrestled it off the postman the day it was delivered. The question is though, will Call of Duty; Black Ops II live up the standards of not only its’ eight predecessors, but the standards of its rival competitors such as Halo: Combat Evolved and Battlefield 3? I am a self-confessed PlayStation gamer so I bought Call of Duty: Black Ops II for PS3.

To start off I headed straight for ‘Campaign’, and instantly noticed to differences. The graphics have been undeniably improved, far more colourful and crisp, with returning characters looking almost lifelike as they guide you through an immersive and emotional storyline written by David Goyer, the co-director of The Dark Knight.  Unlike previous Call of Duties, the outcome of the new Campaign is determined by personal choices you make along the way, giving the game added realism. However, for those of you who care less about the narrative, and came here purely for epic single-player war play, you will not be disappointed. There are plenty of new missions, and plenty of opportunities to be in control, and, with the added bonus of the impressive new graphics and sound quality, it can definitely cause some ‘edge of your seat’ moments.  The most exciting difference I noticed, which also applies to Multi-Player, is the brand new ‘create-a-class’ layout. You can now choose a weapon plus perks at the start of a mission, according to which map or mood you are in. As I am possibly the worst sniper in the history of Call of Duty, I can now modify a DSR 50 or Ballista to get some much-needed practice in. I am usually a girl that gets my jollies off playing Multi-Player, but I am I became so involved in the energy and depth of the Campaign that I completed it in under two days, much to the disgust of my roommate.

Next I moved onto my old faithful, ‘Multi-Player’. This is a great starting point for newbies and people who are less confident with the game as you can engage in ‘combat training’ playing against enemy bots. There are three modes all designed to allow you to practice with-out the stress and pressure of playing against Call of Duty fanatics who had undoubtedly reached Prestige twice the same day the game was released. ‘Boot camp Mode’ allows you to play against enemy bots in a Team Deathmatch; the main aim of this is to practice your gun control. This is extremely helpful as there are several changes and attachments to the weapons you can now choose, and if you are anything like me and are not naturally good at anything, you will need a few practice attempts before being allowed into the public domain. The ‘Objectives Mode’ allows you to practice the different missions that are available on multi-player. This is always a good idea if you are new to Call of Duty as some of the missions can be confusing and hectic if you don’t have a clue what the objective is, resulting in you getting shot in aggression by your own teammates… Some gamers will be happy that old favourites such as ‘Kill Confirmed’, ‘Capture the Flag’, and ‘Search and Destroy’ are back, with a few new additions such as ‘Hard-Point’. The final mode is ‘Bot Stomp’ similar to ‘Boot Camp’ but no XP is awarded; it also gives you a chance to really brush up your skills before playing online.

Now you are ready to play against real people in the scary online world of multi-player. Even if you are one of the gamers that ‘race to prestige’ don’t forget to check out huge overhaul Treyarch have carried out for your enjoyment. Needless to say the increased quality of graphics and sound has drastically improved the game play, however the creators have gone the extra mile in trying to make the game as realistic as possible by heightening a players awareness, even down to tiny details such as hearing the footfall of your enemy. This has been accused, however, of being ‘unrealistic’ as footsteps and grenade pins are not heard in real warfare, as the sound of gunfire is too loud. However, gamers must remember, that this is just a game. I do have one small issue that I thought would be resolved by now, and that is the fact that all the guns practically sound the same when fired, which, if the creators were going for realism, is a pretty obvious oversight.

The biggest change that practically slaps you in the face as soon as you sign in is the previously mentioned ‘create-a-class’. I personally loved this change, as it allows you to choose a weapon and add modifications and perks adding to a total of 10, according to your personal choice. You can change the perks and attachments depending on your mood, your strengths, weaknesses, and choice of map or objective; it is entirely up to you. For example, on maps such as ‘Overflow’ and ‘Aftermath’ which are very graphically hectic and it is difficult to spot enemy players, you can now attach a target finder to your weapon of choice, allowing for much more precision. I now find myself having a full-blown break down when customising a class, which I am pretty sure, is not healthy.  This new create-a-class will undoubtedly allow players to become highly skilled and achieve kill- streaks that were not possible in the previous Call of Duty.

All in all most of the changes in multi-player are fantastic. The ability to now record or stream your game-play live to the internet has created an influx of wannabe YouTube gamers, and I am constantly in awe when I watch 12 year olds with the weapon ability of an SAS officer. The new maps are, as always, completely up to personal preference; I for one love a few of the new maps and dislike others, but I think that will be true for every Call of Duty that will be released. In terms of ‘replay-ability’, I think it scores pretty highly, as the new objectives, maps and class creation should keep it fresh and fun for a while. There are a few tweaks needed here and there but hopefully Treyarch will have that sorted by the next edition.

Last but by no means least, is everyone’s favourite, ‘Zombies’.  I personally don’t get on with Zombies, not because I’m a girl and it’s too gory or scary, but because I have terrible eyesight and find the graphics too dark so I am constantly getting eaten. However I donned my glasses and dove in for some un-dead action. It was clear to see straight away that the mechanics have been improved here too, with colours and textures definitively enhanced. Revolving around the centrepiece ‘TranZit’, gamers will be happy to hear there are still plenty of hidden Easter eggs waiting to be found in the four maps, as you take on the increasing difficult waves of flesh eaters, allowing you endless hours of gaming without getting bored. Most of the classic perks have been kept on but unlike the last Call of Duty ‘Zombies’, new players receive no new perks, and have to obtain their perks by ‘perma-perk’ challenges, which some players will find difficult. However, without too many spoilers, the new Zombies is a plethora of hidden surprises that could keep any gamer happy for hours on end, unlocking weapons, perks and areas. This edition feels less like an add-on to the game, and still holds its title as one of the gamers’ favourites.