Great news for collectors of tat and rubbish; all hell is waiting to break loose on  21st February as the unimaginatively-named Rambo ® The Video Game launches complete with exclusive bobble-headed figurines with pre-orders.  Now you can have your very own favourite mumbling hero literally looking over your shoulder as you tackle a bewildering array of enemies, in a game that traverses the whole spectrum of the first three Rambo films. Look forward to pasting state troopers, Charlie in post war Vietnam, and humourless, slab-faced Russians in Afghanistan in a globe-trotting mix of time frames and locations.

Published by Reef Entertainment, the game is supposed to be true to the iconic movies to the point of using selected sound bites from the first three of them.  In addition, Stallone has been lovingly modelled so the cut scenes depicting apparently important parts in the story are likely to capture the honed muscles and dull-eyed stare to perfection, enhancing the overall game play experience like never before.  Teyon, the game’s developer, spent much time with Studiocanal, who own the Rambo films, to select the best pieces of dialogue from the trio of movies to make the game an authentic portrayal of a gun-toting psychotic with a mile-wide streak of patriotism going through him like Brighton Rock.  This means that the speaking sections will actually be the likes of Stallone and Richard Crenna, who played “Col. Trautman”, rather than people who only sound vaguely like either of them…speaking. 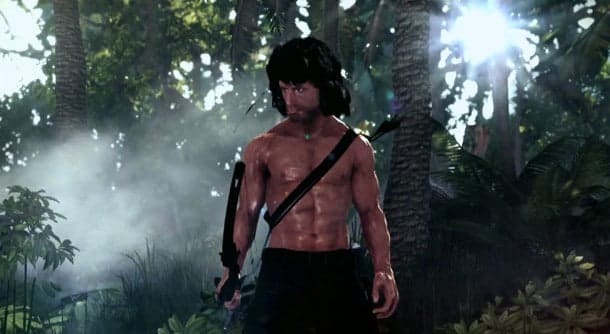 Featuring a combination of stealth attacks and blitzkrieg shoot-‘em’up action, becoming John Rambo looks like being a heart-pounding excursion to the worlds warzones.  The game is thought to be using the Far Cry 3’s Dunia Engine 2 to power its rag doll physics so it should be smooth and satisfying with plenty of destructible terrain to shoot up.  The game was originally scheduled to hit the stores in mid-2013 but last minute polishing have meant that date rolling over into 2014, but it now looks like all systems are go for the newly proposed February launch.

Available on PS3, Xbox360, and PC, the developers have plainly decided that the latest hardware isn’t for them in the first instance, though good sales are likely to see the game launch on Xbox One and PS4 later on.

The limited edition figurines are moulded in the finest plastic and have been lovingly hand painted – probably by kids in a Vietnamese sweatshop in a weird twist of irony.  They are guaranteed to retain absolutely no value whatsoever and are sufficiently jagged to make removing dust from their crevices a daunting task indeed.  Enjoy!